I flew up to Long Island, New York this past weekend for a lighthouse-tour of the island. After getting in Friday night, I camped out at Wildwood State Park in Wading River. Then I drove over to the northeast side to Greenport to catch a morning lighthouse cruise. As we made our way into the sound, we got to see a the after effects of a boating accident the night before, as a drunken ‘driver’ ran his boat up on the breakwater, where it ended up stuck with a nice hole in the bottom of his craft. We then came across our first light, the Long Beach Bar light, which was burned down by vandals back in 1963 and rebuilt in 1991. We then passed by one of the most photographed NY lights, Orient Point. Our next light was on Plum Island before getting a nice treat at the Little Gull lighthouse, where a few gray seals were playing in the water. We then sailed past the haunted Race Rock light and the North Dumpling light. As we made our way back to the port, we took an unexpected detour to check out a few lights in Connecticut – the two New London lights. 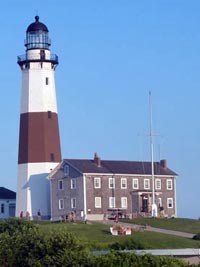 I then drove over to the Horton Point light just outside Greenport, where I was able to climb to the top. Afterwards, I took the Greenport ferry over to Shelter Island, where I then continued onto Cedar Point Park to view the Cedar Island light. I didn’t have alot of time to spend at this light, but had no idea it was about a 2 mile walk in the sand each way out to see it. I knew it was going to be close for the next light in Montauk, as it closed at 7, but amazingly, I made it there just in time, and was the last person to go up inside of it. I stayed in Montauk for dinner and nice walk around the quaint downtown area. I then drove back to the campground to rest up for another day of lighthouse-hopping.

After checking out early Sunday morning, I drove west over to the Old Field Point lighthouse in Old Field. I then drove a bit out of the way to visit and climb my next light on Fire Island. Unfortunately, I drove to the wrong side of the island, and when I asked how far of a walk it was to the light, I was shocked to hear 20 miles. So I got back in my car, and finally made it to the correct side, where the mile-long walk was much easier to handle. Had I driven to the correct side of the island in the first place, I might have made it on the boat trip out to the next light at Huntington Harbor, but my hour delay cost me the opportunity, and I had to settle for some long-distance views of the light way out in the water. I next went over to Lloyd Beach to try to see the light there, but wasn’t sure where to look and never saw it. The threatening skies and rumbles of thunder didn’t help either, and I made my way back to the Islip airport to catch a rare mid-afternoon flight home.