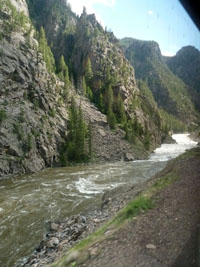 After getting up bright and early to catch our train out of Denver, we headed down to the Mile High City, where we checked in at the train station for our day-long trip to Reno, Nevada. The train was supposed to pull out around 8, but because of flooding in Nebraska and Iowa, our train wasn’t due in at the station until around noon. So C-Lo and I walked into downtown Denver where we grabbed breakfast and checked out Coors Field, the home of the Colorado Rockies. We finally did board the train, and off we headed out west. The train was going awfully slow, though, and the engineer came over the loudspeaker to let us know that the hot sun was starting to warp the track and that he could only go as fast as 15 mph. Luckily, the scenery out the window was beautiful, so I was able to snap a bunch of pictures. And then the train came to a stop for about half an hour. Turns out there was a rock slide and some of the boulders got stuck under the train. After clearing them away, we were on our way again, even though it was starting to feel like we’d never make it to our final destination.

But after a ‘rocky’ start, the train finally got going and we were thoroughly enjoying the scenery that was passing by our sleeper car. As we chugged along the Colorado River, a narrator was filling everyone in with stories and details about the terrain. The train made a few stops here and there, including Glenwood Springs, which I remembered vividly from a couple days before. The conductor of our car was right across the hallway, and we overheard something about a conductor dying, but didn’t know what they were talking about. There wasn’t any cellphone reception on the train, but once in a while, at a stop, you could get some. That is when my friend in California called to see if I was okay. He then explained to me that the train that left on Thursday morning towards Reno got in a big accident just east of Reno with a cargo truck, and that a few people had died, including a conductor. It then made sense what we overheard. My Colorado relatives had heard the news too, and I called them to let them know we were safe and that it wasn’t our train. As day became night, we entered Utah around midnight, but we were both asleep by then.