After a fun first day of my trip, it was time to get up into the mountains, so the whole gang sans Nance drove over to Rocky Mountain National Park, where we first stopped at Estes Park for some sightseeing,  including the famous Stanley Hotel (or rather infamous, as The Shining was filmed here). We then continued up into the Rockies, where we stopped several times to get out and take in the breath-taking scenery.

As we made our way along the popular Trail Ridge Road and crossed the Continental Divide, we encountered falling snow 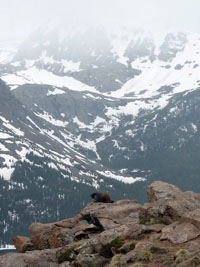 (the road was closed the day before because of snow). Mike, C-Lo and I all jumped out of the car, and proceeded to have a snowball fight! I was loving it, particularly since it was the middle of June! I wasn’t the only one enjoying it, as I saw a marmot out on a rock just soaking it in too. And the marmot wouldn’t be the only creature we saw, as we also encountered elk and moose. We stopped at an area where you can cross the Colorado River, but since it was the highest it’s been in some twenty years (and expected to get higher within the next week or so), the park rangers would not let us cross the small concrete bridge over it. As we made out our way out of the park, we stopped at Grand Lake for a nice dinner and a stroll around town. We then headed back to Boulder to rest up for the next day’s adventures.