Upon hearing there was a new disc golf course put in a few months ago near St. Augustine, I started planning for a trip up there to play it, plus my favorite course in Florida, at Tuscawilla Park in Daytona Beach. Now that the weather is perfect for camping, I decided this past weekend was a great time to go. Leaving early Saturday morning, I drove two and a half hours north to my first stop at another brand new course at a middle school in Palm Bay. Only a 6-hole course, I was able to find the first two holes with no problem, but could not figure out where the other four holes were – I saw the baskets, I just couldn’t find the teepads. Rather discouraged by this, I continued north to Elkton, which is just west of St. Augustine. A new 25-hole course was installed at the St. John’s Fairgrounds there about 6 months ago, and I was finally going to play it. It almost didn’t happen though, as both a big political rally at the fairgrounds and a tournament made it a bit tricky to get in a round. But I did manage to actually play 2 rounds at the very fun course. The gusty winds didn’t help my score much, but it was worth the drive up.

I then drove over to St. Augustine, where I made my way down A1A along the beach. I’ve done this beautiful drive many times, and I usually stop at Fort Matanzas and Washington Oaks Garden. I decide to pass up these 2 places this time and stop by Marineland instead. The last time I was there, about 7 years ago, I remember I wasn’t very impressed with the aquarium, but I figured I’d give it one more chance. Much to my surprise, it was no longer an aquarium but instead a dolphin habitat center. And unless you plan on swimming with the dolphins or even feeding them, it wasn’t worth the $10 just to go and watch them. I then hung out at the beach just outside the center before continuing on south. As I got closer to Daytona, I took a detour through North Peninsula State Park, where I did some hiking and picture-taking. The road that cut through was a fun curvy road with great scenic views of salt marshes and large oak trees. I then stopped by Bulow Creek State Park, for some more fun hiking, before getting on the road that lead to my campsite at Tomoka State Park. 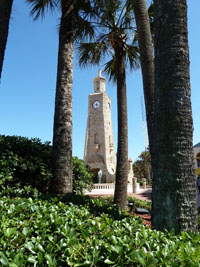 I have camped out several times at Tomoka, and one of my favorite things to do is drive down to Ormond Beach and take an evening stroll along the beach as the sun sets. I enjoyed another lovely walk and then drove to Daytona Beach, where I spent the night on the famous boardwalk. After a peaceful night of camping, I took a morning hike om the park’s several trails and even thought about renting a canoe for a couple hours. However, the gusty winds changed my mind on that idea, and I headed off for some fun disc golf. I first went to Hollyland Park over in Holly Hill, just north iof Daytona Beach. After a few rounds there, I went to the course in South Daytona at Reed Canal Park, where I shot one of my best rounds of golf in a while. It was next onto my favorite Florida course, Tuscawilla Park in Daytona Beach. After the Ft. Lauderdale and Miami courses, which I live pretty close to, Tuscawilla is the next Florida course I’ve played the most rounds at. I didn’t necessarily play that well, and even slightly sprained my left ankle, but that didn’t stop me from getting in a couple more fun rounds there. I then headed back over to the beach, where I made a detour for a stroll around the historic downtown section. I then spent an hour or so back on the beach and boardwalk before embarking a on a nice ride along the beach to Melbourne. I was hoping to get in a quick round before the sunset at the course there, but there was a big country concert there, and the course was unplayable due to this. I then continued south along A1A to Ft. Pierce before hitting the highway for the last hour and a half ride home.