After a great trip the previous weekend up in Maine, New Hampshire and Massachusetts, I headed back up to the New England area this past weekend, where I explored Rhode Island and Connecticut. I was last in this area a couple years ago, when I spent a week in Newport, Rhode Island, and have been waiting to go back since. This time was mainly for the lighthouses, where I embarked on a ten-lighthouse cruise out of Quonset Point on early Saturday afternoon after flying into Providence in the morning. The boat cruised around the Narragansett Bay, including a brief visit to the harbor in beautiful Newport. After the fun 3-hour boat ride, I drove along the eastern coast down to Point Judith to check out the lighthouse on the Coast Guard base.

I then headed west into Connecticut to visit and climb the Stonington Harbor light and also explore the quaint historic section of Stonington. I next made my way over to Mystic, where I made the obligatory stop at Mystic Pizza for an incredibly tasty Hawaiian pizza. It was just as good as two years ago, and it was great to revisit the charming town again.

After staying the night in Mystic, I took an early morning stroll around the Olde Mistick Village, which I had only previously been to at night.

I then drove over to the wonderful Mystic Seaport, which I didn’t get a chance to go to last time. I’m glad I made it this time, as I walked around and toured the seaport village depicting life back in the 19th century. Along with the many buildings you could go inside and explore and boats you could board, there was even a lighthouse, which was a replica of the Brant Point light in Nantucket that I visited about 7 years ago. I could have spent all day here, but I had planned another boat trip, so after an hour of soaking in the charming seaport atmosphere, I headed back into Rhode Island and over to Watch Hill.

I had a little time left before I caught the boat so I drove over to the Watch Hill lighthouse along the gorgeous Rhode Island coastline. I then met Captain Kent at the 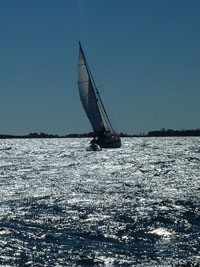 marina, where we headed out for a fun and bumpy ride along the coast where I got another view of the Watch Hill light, along with seeing the Stonington and Morgan Hill lights in Connecticut and even Latimer Reef light on the New York side. We were hoping to see more lights, but the rough waters prevented us from going too far out. It was still worth it, as I got a great view of the coastline, highlighted by all the beautiful turning leaves on the trees.

I next drove further east into Rhode Island to hit their only disc golf course at the expansive Ninigret Park in Charlestown. After a quick round, I headed back up towards Providence where I visited the lighthouse in Warwick. The light is on private property and I was only able to get a couple photos of it before driving over to Conimicut Point Park to view the light out in the water. After several great shots of the light at this pretty park, I struggled to find the next light to view at Stillhouse Cove Park in nearby Cranston, but somehow stumbled across it and was able to get a very distant picture of the Pomham Rocks light across the water. I then made it back to the airport and flew home after another fun New England trip.