With our first day at the park viewing geysers and the second hiking along the canyon, today we explored Yellowstone Lake, the largest mountain lake in the US. But before we drove into the park, we spent some time in West Yellowstone to check out the cool Grizzly and Wolf Discovery Center. As soon as we pull into the parking lot, here comes what looks like two wolves being walked on leashes. Turns out they were wolf dogs and one was particularly happy to greet us as he tried to give us a kiss. Needless to say, it was a little intimidating seeing what looks exactly like a big wolf try to lick your face.

In the center, the wolves are broken up into two packs, each with their own area. As we checked out both the packs, we particularly liked the viewing area of the second pack, where we were able to get some great shots of the wolves through the big glass window. The keepers then fed the grizzlies by hiding their food under rocks and logs. Once the keepers were out of the bear area, the bears were released to forage and find the tasty treats. And it was quite entertaining watching them run around and scurry through the heavy rocks and big logs. And they were apparently very hungry as they continued to hunt and eat for quite some time. And even though it would have been amazing to see either a grizzly or wolf in the wild, we felt much safer viewing them at the center.

We then entered back into the park and drove over to the Lake area. On the way, we checked out the Kepler Cascades and drove across the Continental Divide. As Yellowstone Lake came into view, we were amazed at how big it was and 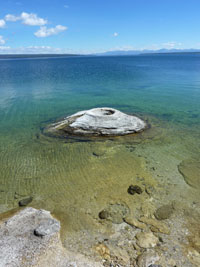 we kept pulling over to take in its magnificence. We made a stop at the West Thumb Geyser Basin for some more cool geysers and hot springs. While there, we were hoping to do a 2-mile hike by the lake but ended up hiking the trail to the quaint Duck Lake instead.

We then continued around the lake to Lake Yellowstone Hotel. There happened to be a private 18-hole disc golf course there, so after we made dinner reservations, C-Lo stayed in the lobby writing postcards while I struggled to find and play the course. Not very well-marked, I only managed to find about 6 holes before I finally gave up. We then drove over to the Natural Bridge, where we hiked out to the impressive rock formation. We both got a kick out of this because there is also a Natural Bridge by where C-Lo lives in Virginia. As we were hiking back, we came across a couple beaver-like animals that ran right in front of us. We later learned they were yellow-bellied marmots.

We still had about an hour to go before dinner so we then drove through the Fishing Bridge area to Pelican Creek Trail. This cute half-mile trail led us to the beachy shores along the lake and delighted C-Lo with all the different types of

birds flying around that she had never seen before. We then investigated Fishing Bridge a bit further and so did the bison that were walking on the road and near the lake.

After a quick stop at the rustic Lake Lodge, we arrived back at the hotel hoping that our stand-by reservation would hold up. And not only did we get seated on time, we had a great view of the lake in front of us. The service was a bit slow due to the number of people eating there, but the scenery and the citrus duck dish were well worth the wait. It was yet another great day in Yellowstone, and we couldn’t wait to see some more new areas and surprises tomorrow.