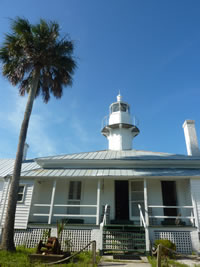 I had been planning this past weekend for quite a while since I was visiting a lighthouse that was only open the first weekend in July. But since last weekend was the Fourth of July, the opening was moved a week later where I began my west coast adventure with a 6-hour drive on Friday night. After camping out just west of Ocala, I drove into Cedar Key and caught the 8:30 boat trip over to Seahorse Key to visit the lighthouse there. Built in 1854 and designed by George Meade, who later became a famous general in the Civil War, a park ranger greeted us with a history of the light, which I then went up to the 28-foot tall beacon. 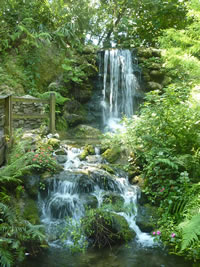 After an hour on the island, I then drove over to Dunellon and Rainbow Springs State Park.  I’ve been waiting to go back to this park as I’ve always enjoyed the two times I’ve been there before, particularly the path that meanders by several small waterfalls. I not only hiked up and down the waterfall trail again, where a wedding was being set up, I also went kayaking along the beautiful Rainbow River. I tried to rent a kayak the last time there, but they were all rented out. But the wait was worth it, as I paddled over the clear water and got a fun little rope-swing show.

I next headed over to Ellie Schiller Homosassa Springs Wildlife State Park , another place I’ve been excited to go back to since my first time. I definitely remember the 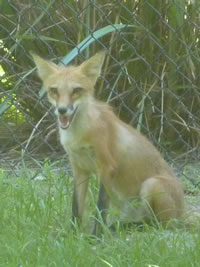 underground water tank, where you can a variety of fish and even manatees, but I forgot how cool the rest of the park was, especially all the cool animal exhibits. I really enjoyed watching the huge hippo and the black bears, but my favorite (and many others too) was the otter. Unfortunately, I caught him right when he was finished playing and was more in the mood to just chill. Just down the road from the wildlife park was the Yulee Sugar Mill Ruins Historic State Park . After checking out the mill remains from the 1850’s, I headed a short ways over to Bluebird Springs Park . I can’t remember if I had been to the mill before, but I definitely remember this park and how pretty it was.

I had decided to stay in Inverness so I drove the hour directly east where I played a fun round of disc golf at Whispering Pines Park. I then went to check out Fort Cooper Park, where I planned to go back to on Sunday morning. I thought about continuing into the park, but decided to come back in the morning and I followed the signs for a boat ramp which led me to the nice Eden Park. After a short time there, I went over to the historic downtown section of Inverness and walked along the boardwalk that winds along Cooter Pond Park. While on the boardwalk, a kid ran up to me asking me to kelp his father who caught a small turtle on his fishing line. Unfortunately, I wasn’t able to get the hook out of his mouth but thought maybe the local police could help. The turtle managed to wiggle away from the father’s foot and jumped back in the water. I felt so bad for the little guy and really wished I could’ve done more. Since I had hardly eaten all day, I went downtown to Stumpknockers for a delicious soup called Ybor City followed by some grilled mandarian ginger shrimp. I then stayed the night at a local hotel. 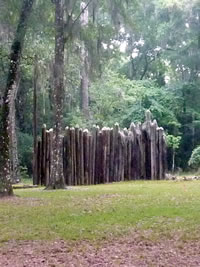 I woke up to a wet Sunday morning where I made my way back to Fort Cooper State Park , where a partial reconstruction of a 1836 fort stands. I did get rained on a bit while hiking the trails, but it didn’t deter me from enjoying this nice park. I then made my way just south to Floral City to play a quick round of golf at Floral Park before the rains chased me away. As I drove through the rain to my next destination, I stopped in the historic section of Clermont to check out the farmer’s market and walk in the drizzle along Lake Minneola.

I was hoping to go to Lake Louisa State Park next, but the rains picked back up and I had to continue on south instead. As the skies cleared up for awhile, I stopped over in Dundee and went to Lake Marie Park for a short hike along the water. Next I drove in and around Lake Wales, which I’ve been to many times before while visiting Bok Tower Gardens. I decided not to stay here too long and I headed over to 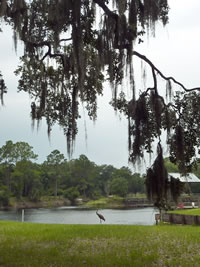 Lake Kissimmee State Park where once again, I got in a short hike before the rains drove me away. So far,  Sunday was going quite as planned and I was really getting sick of the rain and cloudy weather. That was all about to change when I  decided to play a round of disc golf just off the turnpike in Ft. Pierce.

As I made my way there under beautiful sunny skies, I stopped at the Ten Mile Creek Preserve. I’ve been here a couple times briefly, but I never hiked the fun short trail. I kept hearing a noise all around me and when I looked down, there were hundreds of big yellow mating grasshoppers. I literally had to tiptoe around them as I didn’t want to step on them (and also wanted to give them their privacy). I then got in a round of golf at the fun Gordy Road Recreation Area course. Jonesin’  for some more golf, I next played the course on the campus of FAU in Jupiter. I then treated myself to another scrumptious dinner at Captain Charlie’s Reef Grill in Juno Beach – a nice ending to an adventurous weekend.

One thought on “Cedar Key”