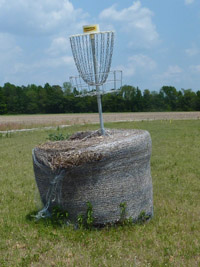 I played a round at the fun and pretty Goldsboro course in the morning, and then headed a bit back up north to for a quick round at the course in Smithfield. I then made my way back over to Mount Olive College for another quick round before continuing south into South Carolina. My next course was at a private 500-acre farm in Darlington, which is famous for its racetrack. Greeted by the owner as soon as I pulled up, I thoroughly enjoyed this fun and short course at Pim Farms which featured many obstacles including bales of hay guarding the baskets. The farm also features a corn maze, but I got back on the road instead to hit my next course in Hardeeville at Sargent Jasper Park.

I’ve played here a few times in my travels up north but this was the first time I played while the park was open (the other times were early in the morning before the park opened). It was also a relief to see it nice and dry as the last time I played it, I had to wear my knee-high galoshes. I ended my day of disc golfing at another one of my favorite courses at Tom Triplett Park in Pooler, Georgia, just west of Savannah. Again, I stayed at a hotel in the town where I was going to be golfing at the next morning, this time in Hinesville, Georgia.