C-Lo and I said our goodbyes in the morning and I set off for the long trip back to south Florida. My first stop was at Lincoln-King Park in Newport News to get some pictures of the Newport News lighthouse, which seemed to be an identical one to the Thimble Shoals and Wolf Trap lights. The foggy weather, though, didn’t make for the best pics and I figured if the sun came out, I might come back here a little later in the morning for some better pictures.

I then drove 15 minutes down the road to the Bennett’s Creek Park disc golf course in Suffolk. As I played the 18 holes there, the sun was starting to shine through, so after 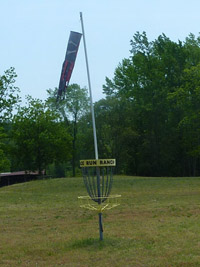 the round, I drove back up to Newport News for some better lighthouse shots. The fog was still hanging around out in the water but I did get some pretty good photos from the bridge. I then drove back down into Suffolk to play the Ace Run Ranch disc golf course. Owned by a fellow player that I used to know back in my Virginia playing days, I had always wanted to play his course and I finally got to get in a  fun and challenging round there. Ace run means the basket is within hole-in-one distance. Needless to say, my short throws didn’t have a chance of getting a hole-in-one or ace. But I still very much enjoyed the homemade course.

I next made my way further south back into North Carolina, where I stopped by another lighthouse that I hadn’t planned on visiting. I’m glad I did though, because not only was it a very unique light, the town of Edenton was extremely cute and charming and I even overheard a couple saying how much they loved to move there. The light was not in very good shape but plans have been made to renovate it. I also visited the Barker House there, where I learned alot more about the history of this small port town.

I then drove across the Roanoke River to another lighthouse in Plymouth. Ironically, this light was a replica of the lighthouse I just visited in Edenton, even though it was not an exact copy as it looked quite different than the original. I continued south to Greenville to play the new course there. I was also hoping to play the old course I used to play at East Carolina University, but I heard it was pulled just six months earlier. I still really enjoyed the new course, and the next new course too, in Kinston. Since the next course I planned on playing was in Goldsboro the next morning, I ended up staying the night there.