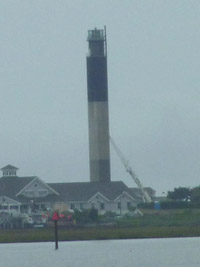 Just like on Saturday morning, I woke up to another rainy day, but I was hoping it would clear up in time for my next lighthouse adventure, which was just over the border in North Carolina in Oak Island. Since I arrived before my scheduled lighthouse tour, I played a quick rainy round of golf at the course there and also visited Fort Caswell, which had a few buildings from the Civil War and WWII still remaining. I then did my private tour of the second youngest lighthouse in the states, which was built in 1958, and was very unimpressive looking compared to the other lights I had previously seen. I’m sure the view from the top is normally gorgeous but allI was able to see was rain and fog. 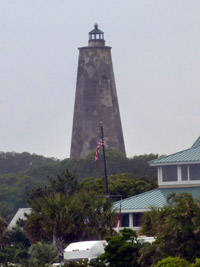 A little jaunt up the road to Southport was my next destination, where Itook a ferry over to Bald Head Island. The light there definitely made up for the Oak Island one, as the 1817 structure was easily the coolest lighthouse I’ve ever been to and even the constant downpour couldn’t dampen my experience there. After taking the ferry back to the mainland, I hopped on another one to Fort Fisher and visited the North Carolina Aquarium there. A very cool aquarium, with a great shark tank and a cool albino alligator exhibit. I next ventured over to the fort there and enjoyed a nice rainy walk along the fort walls. As I drove away along the coast up towards to Wilmington to visit and stay with some friends, I made one more stop at Kure Beach for some last photos of the day.