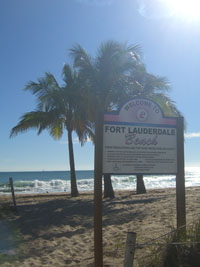 Living in south Florida for 10 years now, I’ve spent quite alot of time on the beach, but the majority of it is at night since I go so often after work. So I decided to spend this past weekend at two of the most famous beaches in the world – Ft. Lauderdale and Miami. You used to be able to park for free on the streets along Ft. Lauderdale beach, but now it seems more economical to park at Hugh Taylor Birch Park and walk across the street to the beach. So after getting to the park just 10 minutes down the road on Saturday morning, I hiked around the park a bit and then headed over to the infamous beach. I’ve been to this beach many many times, but this was the first time equipped with my camera. Since I didn’t want to risk getting my camera wet from the salt water, I didn’t go in the water but it was very hard to resist. I walked south all the way down to the Port Everglades Inlet, which is a main port for cruise ships to pull out of and a great place to see these mammoth vessels. After a nice long stroll, I headed back north towards the park, walking along the street and checking out the several shops along the way. I also made a stop at Beach Place, which is a nice little shopping plaza right across the street from the beach. 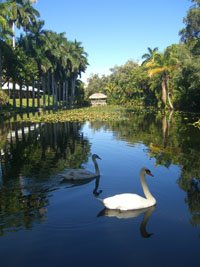 As I got closer to the park, I headed over to the Bonnet House, a historic house and gardens. I’ve passed by here several times but had never checked it out, so I decided to investigate. Named after the bonnet lillies that are predominant in the surrounding waters, this beach cottage was built back in the 1920’s when Hugh Taylor Birch gave this area of land as a wedding gift to his daughter. who had just married famed Chicago artist Frederic Clay Bartlett. As I took the tour of this stylish house, I learned that Frederic’s third wife lived here until 1995, when she was 107 years old. The gardens were a treat to meander around, but I didn’t see any monkeys, which supposedly also hang out here up in the trees. I guess I was the only monkey around this day. Afterwards, I walked back on the beach for a while longer and then some more at Birch Park before driving over to downtown Lauderdale.
Another favorite local area of mine to hang out at, this historic area is full of many old houses from back in the early 1900’s, and is situated along the New River. This area is known as Las Olas Riverfront and features the fun Riverwalk. I also went over to the shopping district along Las Olas Boulevard that features many cool shops and restaurants.

After a fun Saturday at Ft. Lauderdale Beach, it was now time to explore Miami’s famous South Beach. Amazingly, this was the only fourth time I’ve ever been here, and the last time was eight years ago. I didn’t have too good of a memory from back then (the smell around the city was less than fragrant and the parking was 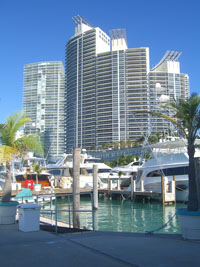 horrendous), and really had no desire to go back. But I figured I’d give it another try, and did some research online on exactly where to go and what to check out. And I’m so glad I did, as I was not only able to find parking with no problem (and a much cheaper rate than last time), I went to a great park on the south side of town called South Pointe Park. With a beautiful view of the inlet and the skyline of downtown Miami, this park is ideal for biking and blading around and really made me wish I had brought my bike. I then walked north along Lummus Park, which runs parallel with the beach and includes a long wooden boardwalk. Not able to take it anymore, I headed off the boardwalk and onto the sand, where I enjoyed the beautiful waters and the bright sunshine.
I then spent some time walking around the popular Collins Avenue and the Lincoln Road Mall. I also explored more of the inland areas around Miami Beach, first going to Flamingo Park and then the Holocaust Memorial. Unfortunately, I wasn’t able to find any parking near the memorial and after driving around for 15 minutes, I decided to head on. As I drove out of Miami Beach, I took the Venetian Causeway. Again wishing I had my bike with me, I wasn’t able to stop and get any pictures of this beautiful area that has more great views of Miami. But it was a great way to end my weekend tour of south Florida’s hottest spots, and I will definitely be returning to South Beach soon…with bike in tow!

2 thoughts on “Life’s a beach…in Ft. Lauderdale and Miami”