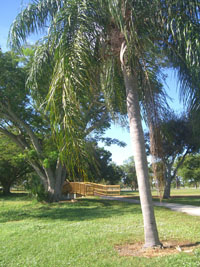 After taking a couple weekends off to recover from my Hawaii trip and catch up on things at home, I was ready to start exploring more of Florida again. And what better way than my typical North-South weekend. My first adventure on Saturday was at John Prince Park in Lantana, which is about half an hour north of home. I’ve been to this park many many times before, but have yet to blog about it. So here ya go – one of my favorite places in south Florida to go biking, where I once again enjoyed another fun ride along the 4.5 mile paved trail that goes around the beautiful Lake Osborne. I used to go to this park on a more frequent basis, where I would pretty much spend all day biking and hiking around and even camp out at the campground, usually getting a site right near the water. I’d usually then drive about 20 minutes northwest to Okeeheelee Park in Greenacres.

So why make this Saturday any different – bet you can’t guess where my next stop was. Okeeheelee Park also boasts a fun 5-mile paved bike trail that meanders around several lakes that are full of fishermen, boaters and water-skiers. After another bike ride, I rented a kayak and paddled around one of the lakes for an hour, stopping for a few minutes at an island in the middle of the lake. Unfortunately, the island’s ground is too full of sand burrs to walk around on it barefooted, but I have explored this island before…with shoes on, of course. I then checked out the nature center there, where you’re greeted by a barred owl, who seems to watch your every move. They also have a cute little burrowing owl, who is just as attentive but much more elusive, usually ducking down into his little cubbyhole as soon as you make eye contact with him. I then enjoyed the serene nature trail that leads to a lookout where you used to always see deer hanging out before poachers killed them last year. It’s just not the same without the deer.

I had originally planned to spend more time up north but since I had plans to play some glow-in-the-dark Halloween disc golf back near my neck of the woods, I drove back down to Pompano Beach, where I took a nice long walk along the beach to the Hillsboro Inlet, where the Hillsboro Inlet Lighthouse shines right across the water. I did the exact same walk on Friday night, but it was just too dark to get any really good pictures, so this time, I made sure I went with plenty of daylight to spare. As I was taking photos of the lighthouse, I asked a jet-skier if the beach where the lighthouse was was public. He said that it was a private beach, but if I wanted to hop onto his Sea-Doo, he’d take me across the inlet to get some closer pictures. So we drove across the way, where I was able to get some nice up-close shots of the lighthouse. I told him about my blog and to check it out, so Mitch, thanks again for the ‘water-taxi’ ride – the pictures came out great! I ended the evening by meeting up with a couple disc golf buddies and playing a quick round of night disc golf. 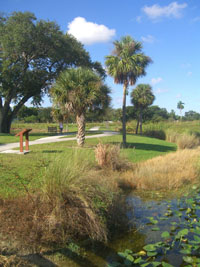 Since I hit some old stomping grounds on Saturday, I ventured out to some new parks on Sunday in the Miami area. First up was Snake Warrior’s Island, a natural area in Miramar, which is just north of Miami. I’ve known about this place for a while, but had yet to check it out til now. And I was very impressed with how nice and pretty it was, as I walked around the surrounding lakes along the paved path. I was also amazed at all the history of this area, as it was known as an Indian village back in the early to mid 1800’s.

I then headed south into Miami, where my next new park was A.D. Barnes Park. I

first heard about this park only 6 months ago, and I enjoyed another nice hike around the park and the lake within it. It also has a nature center, but it was closed, so I wasn’t able to check it out. After an hour or so there, I drove about 5 minutes west to Tropical Park, which I’ve been to twice before, but never really spent alot of time at. More fun hiking trails and lakes to meander around, this park also features a very nice memorial to all the fallen police officers in Miami-Dade County. Since I was so close to the disc golf course at Indian Hammocks Park, I met a good friend at the course, where we played a couple rounds.