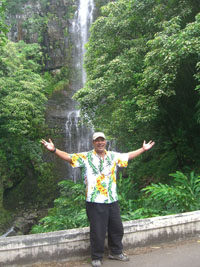 While planning for this trip, I wanted to visit a couple of the other islands too, especially since I had heard that Kauai and Maui were must-sees, in particular Maui’s infamous Road to Hana. But since we already had a place to stay, we could only do day trips.  So I planned one for Kauai on Saturday and the other one for Maui, which is where we visited today. I booked both trips through Roberts Hawaii, which specializes in one-day tours to the different islands. Since we had to met the shuttle at 5:30 am, we both got up around 4 in the morning. Our flight to Maui left around 6:30, and we were on the island around 7, where we met our tour bus. Also on the bus was a family of four from Maryland, who we became good friends with. The bus driver was cool and funny, and sounded alot like Cheech (hey man…!).

As he took us on our way to Hana, he gave us alot of history of the island, including  the sugar cane and pineapple business. Our first stop was at a roadside fruit stand that the driver was good friends with. His friend hooked us up with free samples of sugar cane, passionfruit and Maui Gold pineapple, which is the best tasting pineapple in the world. We also stopped at an overlook, where we tried some wild strawberry guava, which was also rather tasty.  We stopped several more times on our way up the extremely winding road as we saw one breath-taking view after another of lush greenery, daring mountainsides and enchanting waterfalls, like Waikani Falls and Wailua Falls, where we bought some souvenirs from the locals. We got a fantastic view of the island and its peninsula at the Keanae Lookout. We then had lunch in Hana at Wainapanapa State Park, where we took a walk along the beautiful black-sand beach.

As we continued to go up the mountain, the

road went from paved to extremely bumpy, and it made it an experience just to hold onto the camera as we kept snapping pictures of the beautiful landscape from the bus. Quite frankly, I’m surprised I didn’t drop my camera out the window. We made several more stops, including one at Charles Lindbergh’s grave, a very modest site for such an American icon that you would never know about unless someone told you. Our last stop was at the Tedeschi Winery, where we sampled some delicious pineapple wine. A fun and long day indeed, with a bunch of incredible photo ops, and we definitely want to come back to this beautiful isle.

After we arrived back at the hotel, we grabbed dinner next door at PF Changs. Both of us have eaten at this chain in other cities, and expected another excellent dinner, but we were both highly disappointed at the blandness of their food. This was our first bad food experince in Hawaii, and hopefully our last too.