One of my favorite places to visit is lighthouses. I’ve always found them very romantic and mysterious. I also love learning about the history of them. I’ve been to quite a few along the east coast, including all six that are open to the public in Florida. I spent this past weekend visiting two of them, one near Miami and the other just above West Palm Beach. 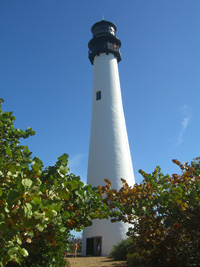 On Saturday, I went to the one at Bill Baggs Cape Florida State Park on Key Biscayne. This is the second time I’ve toured this lighthouse (the first time being last summer). Originally built in 1825, it was burned down in 1836 during the Second Seminole War and rebuilt 20 years later, making it the oldest standing structure in Miami-Dade County. It is 95 feet tall, has 119 steps and overlooks the Atlantic Ocean and Biscayne Bay. There is also a replica of a keeper’s house from 1878 (the last year it was occupied) that you can tour, plus a short video about the history of the lighthouse and the surrounding area.

After having the lighthouse to myself for a while, I spent the rest of the morning hiking and biking around the park, including a beautiful walk along the beach and a fun ride along the bike path that borders the crystal blue Biscayne Bay. I then spent 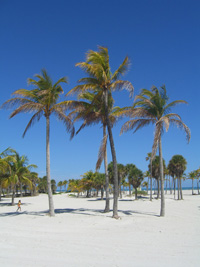 the afternoon biking all over scenic Key Biscayne, including Crandon Park, with its picturesque beaches and its quaint zoo-turned-botanical gardens. Since I had to go back and get my car, I went up in the lighthouse again. But this time, I wasn’t alone. I capped the gorgeous sunny day off with a nice long walk along the coast of Virginia Key at Virginia Key Beach Park, which is just off of Key Biscayne. Being originally from Virginia, I’ve always been partial to this key, and I had such a good time there, I almost didn’t make it back to my car before they closed the park. In all, I biked about 15 miles and hiked about 10. A long and fun day, indeed.

On Sunday, I headed up north and even invited a good friend to come along. I love 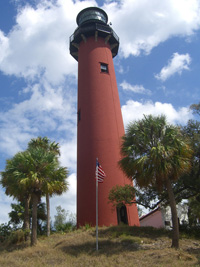 taking people to places they’ve never been to before, and she had never been up in the Jupiter Inlet Lighthouse. I hadn’t been there myself in about 5 years, and I think this was the third time I’ve visited it. The weather seemed a bit iffy for a while, with a 50% chance of rain forecasted, but the clouds broke for long enough to get some stellar pictures. And was it ever windy up top. I’m amazed my hat didn’t fly off, or even myself. Whereas the Key Biscayne lighthouse is free and you can tour at any time, you had to pay and go with a tour guide for the Jupiter one. You’re only allowed 15 minutes at the top, but there is a guide up there to give a history of the lighthouse and the surrounding areas, and to point out all the famous people’s houses on Jupiter Island, including Tiger Woods and the late Perry Como (“catch a falling star and put it in your pocket…”). By the way, the Jupiter Lighthouse was built in 1860, is 105 feet tall and has 105 steps. It overlooks the Jupiter Inlet, which leads out to the ocean.

After touring the lighthouse, we headed across the inlet to the Crab House for some delicious food and great views of the lighthouse and inlet. I had the scrumptious Island Shrimp Roll-Up, made with spicy shrimp, fresh mango, ripe avocado and ranch dressing, all rolled up in a spinach tortilla. Then topped it off with maybe the best piece of Key Lime Pie I’ve ever had, and I have had many a piece of Key Lime Pie. My friend and I discussed taking a boat trip around the inlet, but the weather was starting to turn a bit chilly, so I took her to a really nice hiking trail just up the road at the Hobe Sound National Wildlife Refuge. A nice meandering walk that leads down to a small beach along the intracoastal, it was the perfect way to end another great day of fun and sun. Til next weekend…

9 thoughts on “A Tale Of Two Lighthouses”