After spending a few weekends ago with C-Lo in Orlando, we got together again, but this time in the northeast area of the United States in Connecticut, Massachusetts and Rhode Island. Since I was turning 40 earlier this year, I wanted to go somewhere I’ve never been to before to celebrate it, and I asked C-Lo to join me. I decided on Newport, Rhode Island after hearing about how beautiful it was, and August would be the perfect time of year to go. C-Lo had always wanted to go there too, but she wasn’t able to able to book anything at her timeshare until early November, so we settled on that date. By the way, I did end up having a great time on my 40th in, ironically, Orlando. where my friend Steve and I went to see the Tubes, one of our favorite bands from the 80’s, and play disc golf in and around Orlando for a few days. And that was also the trip I played Pirate’s Cove for the first time.

C-Lo and I flew into Hartford, Connecticut on Friday night November 8th, where we stayed at the Chester Bulkley House, a bed and breakfast in Wethersfield, a half hour away from the airport. We spent Saturday morning and early afternoon walking around the cute and quaint town of Wethersfield, including the Silas W. Robbins House. We then drove up to Hartford, where we were hoping to check out the Mark Twain House. Since it was closed due to an event, we went to the Harriet Beecher Stowe House, which is directly across the lawn from Mark’s house. A friend of a friend lived just over the state border in Massachusetts, and we had planned to spend the day with him playing disc golf around his neck of the woods. Since we were not able to connect in time to plan our day together, C-Lo suggested we drive up to Salem, Massachusetts, where she had visited a few years back. So we drove up north, and stayed the night just outside of Salem.

Salem, a seaport town, is best known for the Witch Trials in the late 1600’s, and the historic section was all about witches. After doing the whole ‘witch’ tour, including

the Witch House and several museums, we walked over to the House of Seven Gables, which inspired Nathaniel Hawthorne’s famous novel. On a side note, one museum that C-Lo really wanted to see but was unfortunately closed for the season was the Lizzie Borden Museum. We later found out that the ‘real’ Lizzie Borden museum was at her house in Fall River, which is now a bed and breakfast. Since C-Lo is such a big fan of Lizzie (I had only heard of her name, but didn’t know who she was), she thought it’d be cool to stay at her B&B, but there were no rooms available until Friday. So after staying the night near Fall River, we headed into town on Monday to visit her place and grave site. I knew C-Lo was really enjoying this day, and I finally learned about LIzzie Borden. We then continued to drive south to Newport, where we checked into our hotel right in the super-quaint historic section. After walking around town a bit, we both knew we made the right choice to come out here. We were immediately taken by its quaintness and charm. 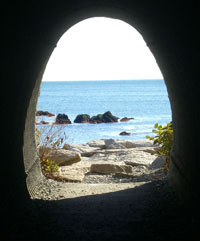 The next day, we hiked on the Cliff Walk, a 3.5-mile path that winds along Newport’s shoreline with spectacular views of Narragansett Bay and the mansions that reside nearby. We spent Wednesday morning checking out the southwest side of Newport, including the Castle Hill Lighthouse and Fort Adams, which was closed for the seaon. We discussed going out to Nantucket for a day trip, but the weather was too cold. However, we did drive out to Cape Cod, where we played a quick round of disc golf and had lunch at Hyannis Port, one of the ferry ports to Nantucket.

Since we got to see the outside of the many mansions that line the Newport shore, it was time to go in a couple, which we did on Thursday as we toured the Breakers and the Chateau-sur-Mer. A summer cottage for the Vanderbilts in the late 1800’s. the Breakers is the grandest and most famous of all the Newport mansions. We then checked out the more modest but equally beautiful Chateau-sur-Mer, which was the first big mansion in Newport in the 1850’s.

After checking out of our hotel on Friday morning, we drove up to Providence, Rhode Island, where we walked around town and got completely lost as we tried to find the Columbus Theatre, where we saw the Lizzie Borden Live play. As if the play wasn’t enough Lizzie Borden for the night, we then drove back to Fall River to stay

the night at the Lizzie Borden Bed and Breakfast. Known as one of the most haunted houses in the states, this is the very house where Lizzie ‘committed’ the ‘crime of the century’ in which she alledgedly killed her dad and step-mom with a hatchet back in 1892. MonsterQuest even did a show on this place, and the only room they found any ‘paranormal’ activity just happened to be the room we were staying in. I was too tired to even worry about this, but C-Lo was in ‘Lizzie heaven’ and stayed up all night watching videos and talking to the other guests in the house. After an uneventful night, we did the grand tour of the house the next morning, where I learned everything I need to know and more about Lizzie.

We slowly made our way back to Hartford, where we stopped and stayed at Mystic, Connecticut, which was made famous by the ‘Mystic Pizza‘ movie. And yes, we had pizza at the famous eatery, and it was some of the best pizza we’ve ever had. We also walked around the quaint downtown section and visited the Olde Mistick Village in the evening. Since we had to get back to Hartford to fly back home, we stopped by the Mystic Seaport on Sunday morning, but didn’t have enough time to really explore it. We then parted ways at the airport.